Donate Lego toys, recycle plastic, reuse paper products? Why go through all the trouble of recycling and repurposing stuff? How can recycling benefit us and the environment?

Recycling minimizes the level of waste that gets burned in incinerator plants or deposited in our landfills. Plastics (including Legos), batteries, etc. decay in landfills and toxins are released, making the soil unsuitable for most uses. Pollutants from landfills find their way into streams and eventually the ocean, adding mercury and other toxins to our food supply. Recycling solid waste also helps reduce global warming by preventing the release of millions of tons of carbon equivalent.

Recycling is far more efficient, than manufacturing something out of fresh raw material. Recycling not only saves money it saves large amounts of energy. The energy needed to extract and process metal from mines is much greater than what’s needed to recycle metal from waste products. For example it takes 20 times as much energy to produce a new aluminum can from the earth compared to a recycled can! Recycled paper needs 40% less energy to produce than new paper.

Recycling creates meaningful jobs, increases efficiencies, and reduces cost, all of which help build a stronger economy for all of us to enjoy.

Recycling helps reduce the need to damage rivers, wetlands, and forests essential to wildlife. Lack of recycling has contributed to what is known as the Great Pacific Ocean Garbage Patch. Eighty percent of this comes from land (plastic bags, bottles, and other products, even small toys like Legos).

When people have a great common cause to support, they come together and build social networks to help encourage others. Recycling is a great example. In neighborhoods across the nation, we see concerned people working together forming recycling groups, environment lobby groups, and starting their own great recycling initiatives.

BrickRecycler.com is one example of a grass roots environmental initiative. When two kids found out that billions of Lego pieces are produced every year, but so many of them end up in landfills, it broke their hearts, and the idea of Brick Recycler was born. Millions of Legos have been spared the fate of being left to decay in landfills, or sitting in lonely dusty toy boxes.

Not only has mother earth benefited, millions of used Lego pieces have been given new life, creating joy in the lives of thousands of children who are able to use them to build whatever their imagination dreams up. 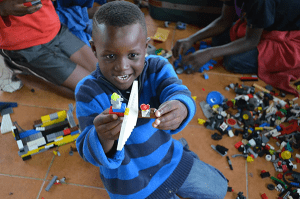 Every person can make a meaningful impact on the environment. Recycling one more bottle or can a week is great, but telling others about great recycling ideas has an even more dramtic effect. Brick Recycler’s largest need right now is to get the word out to more people, since most don’t know that many thrifts simply dump mixed pieces in recycling bins, but Lego pieces can’t be recycled by city recycling programs, so they are then sorted out, and tragically dumped in the landfill.